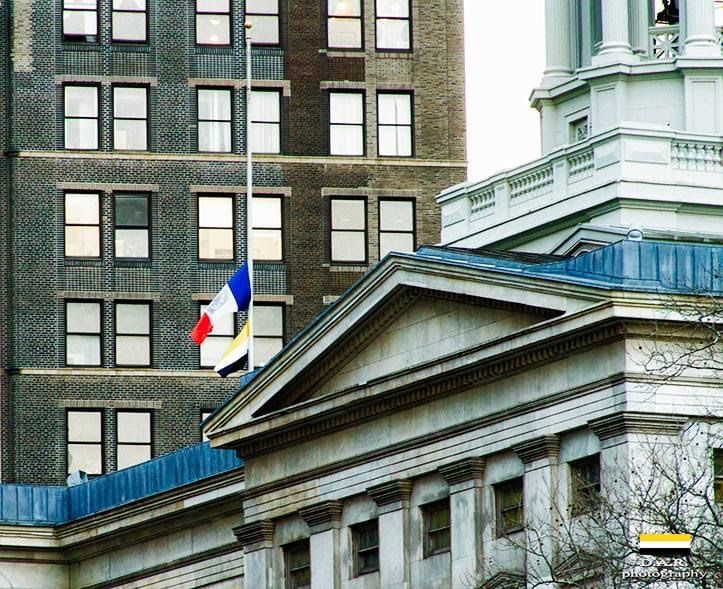 The flag raising ceremony, was a celebration of Garifuna-American Heritage Month and Garifuna pride. It celebrated Garifuna, Heritage, Ancestry, Culture and the 200,000 Garinagu, from Honduras, Belize, Guatemala, Nicaragua and the Garifuna-Americans who live in New York City. New York is home to the largest Garifuna population outside of Central America.

The flag was also displayed in the courtroom bench, along the United States, New York State and the Borough of Brooklyn flags, which served as background to the official podium.

The Garifuna Flag
The Garifuna flag is universally agreed to consist of three horizontal stripes of Black, White and Yellow. While there’s general agreement that the white stripe is located in the center. The order of the Black and Yellow stripes is debated.

The location of the yellow stripe is seen at the top in Honduras, Guatemala and Nicaragua. However, in Belize the Black stripe is located on top.

The first time I saw the Garifuna flag was in the early 1990s, in Belize with the Black stripe on top. The first time I saw the Garifuna flag in Honduras, was during the commemoration of the 200th anniversary of the arrival of the Garinagu to Central America, or the Garifuna Bicentennial in 1997. It was there that I saw it with the yellow stripe on top for the first time. It also had the Garifuna Bicentennial logo painted in the white center stripe. I took a picture of it, which I have included in this post. Ever since then, I noticed that Guatemala, Nicaragua and their respective USA Diasporas, adopted the Honduran Yellow White and Black design.

The other thing I remember from my two weeks stay between La Ceiba and Trujillo, was an ongoing resistance among the young people, to the placement of the yellow stripe on top. They felt that since Black represents the African Heritage, it should be on top. However, the Yellow White and Black design became the standard.

The other debate I’ve read on social media, is about the different seals used in white center stripe of the flag. The first one I remember seeing, was the National Garifuna Council of Belize’s logo. The next one as I mentioned above, was the Garifuna Bicentennial logo in Honduras. In 2003, Ruben Reyes Designed an emblem for the national Garifuna flag which he proposed for the Garifuna Nation. 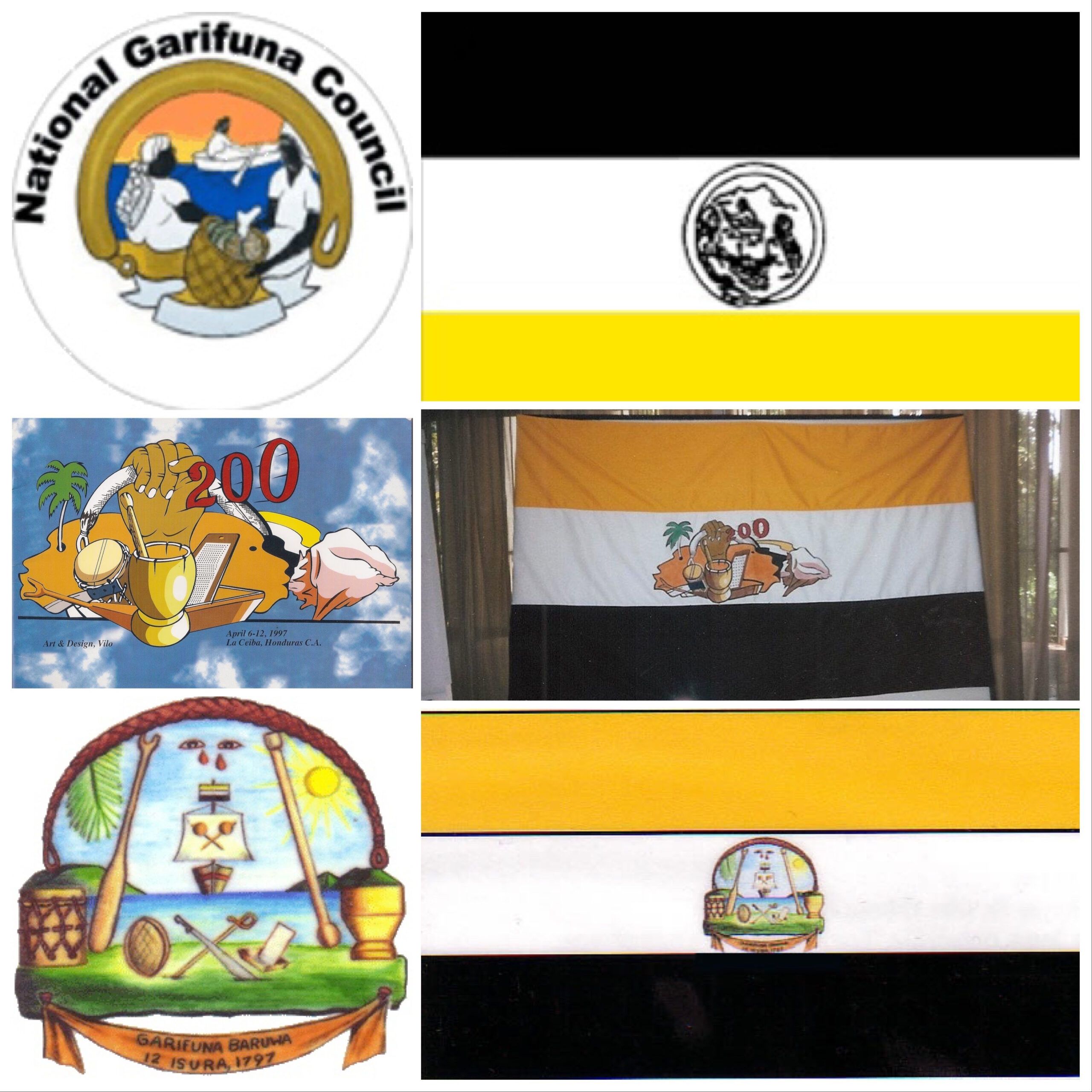 Okay, those are my observations. The first written description of the Garifuna flag I read, was on the National Garifuna Council of Belize’s website and here it is in is entirety:

The Garifuna flag consists of three horizontal strips of black, white and yellow, in that order, starting from the top. This flag has long been accepted internationally as the flag of the Garifuna Nation and the colors have been used in any forum where Garifuna people assert their Garifuna identity. The flag of National Garifuna Council is identical to the Garifuna flag with the addition of the NGC logo set in a white circle in the center.

This flag represents an evolution that commenced with the Carib International Burial and Sick Aid Society (CIS) founded in the early 1920’s, whose flag was made up of horizontal strips of red, yellow and black. Red (funati) stood for the blood of the Garifuna, black (würiti) the skin of the Garifuna and yellow (dumari) the food of the Garifuna. T.V. Ramos added the strip of white (haruti) in the middle, substituting it for the red, when he formed the Carib Development Society (CDS) later in the same decade. Carib International Society, as the name implies, was international in scope and its development appears to have been facilitated by the convergence of Garinagu from the various countries in places like Puerto Barrios where they flocked in search of employment with the United Fruit Company. The area of operations of the Carib Development Society, on the other hand, was limited to Belize although the influence of its initiatives spread far beyond the borders of Belize and laid the foundation for the later emergence of its successor, National Garifuna Council.

It is the CDS flag that became established as the Garifuna flag while the CIS flag became relegated to the dustbin of history in the sense that hardly anyone remembers it and there seems to be no written record of it. It does not even feature in the 1931 photograph of attendees at a CIS meeting in Barranco. Why did the CDS flag and not the CIS flag come to be seen as the Garifuna flag? One can conclude that it had to be because of the founding of the Garifuna Disembarkation Day (which later became Garifuna Settlement Day) in 1941 by T.V. Ramos, who was also the founder of the Carib Development Society. This was the only Garifuna day celebrations in the world, and it attracted visitors from other countries who saw the CDS flag flown in the context of the celebrations, saw it as the Garifuna flag and took it home with them as such. The black, red and yellow flag of the Carib International Society was never associated with a similar celebration or even with an international flavor.

Each Garifuna community in Belize had a Carib/Garifuna Settlement Day Celebrations Committee to organize the celebrations. These celebration Committees were creatures of CDS. It was these Committees that were brought together with an expanded mandate and established as branches at the founding of National Garifuna Council. This means that National Garifuna Council is a direct descendant of the Carib Development Society and like its parent, the Settlement Day Celebration Committee(s), can be said to be guardian and owner of the flag.

What is the significance of the colors of the Garifuna flag? This question has been asked quite frequently and some attempts have been made to answer it although I am not aware of any written explanation. I will now try to piece together what I have heard, with the hope that this will evoke some reaction that can contribute to a full and complete documentation of the significance of the colors. It should also be noted that it is people who give meaning to symbols. We, therefore, have the option of expanding on whatever meanings have been handed down to us by the originators of the CIS and CDS flags.

Black
The black strip, which is located at the top, represents the black ancestry of the Garifuna people. The people have always acknowledged the African input into what became the Garifuna people, a phenomenon that occurred in St. Vincent starting in the seventeenth Century.

This color, at another level, recognizes the hardships and injustices that the people have had to endure, their struggles for survival and the odds that they have had to overcome in the course of their history. Apart from the experience of the Middle Passage, which we share with other black people of the Americas, there was the imprisonment on Balliceaux, the exile from our Vincentian homeland after the so-called Carib Wars and the replay of the Middle Passage in the form of the mass forced relocation to Central America.

Tough though these experiences have been, they helped to strengthen our spirit and shape our spirituality which is based on the principle of reciprocity captured in the Malí song in the words “Aura buni Iyaya waü, amürü nuni” – I for you, Grandmother, and you for me.

Yellow
The yellow strip at the bottom of the flag symbolizes the other half of the ancestry of the Garifuna – the Amerindians or Yellow Caribs as they were referred to by Europeans. These were actually a mixture of Caribs and Arawaks and formed the host community in which the fusion of Africa and South America took place to give rise to the emergence of the Garinagu as a distinct group indigenous to the circum-Caribbean region.

In contrast to the hardships experienced in the course of history, the yellow symbolizes the hope and prosperity. Yellow is the color of grated cassava, which is further processed to make ereba, one of our staple foods. It is the color of cassava juice, a color that is further brought out in the process of turning it into dumari, an additive for enhancing sauces, soups and stews. (It seems to have been an identifying feature of Garifuna people as it is the “tumali” that is referred to in the racial slur “Salt head Kerub, tumali water”). Yellow is also the colour of the rising sun, which brings new promise and much hope for a better life. Yellow, therefore, represents hope, plenty and prosperity, as well as the Carib/Arawak input into the Garifuna identity.

White
The white strip, located in the middle between the black and the yellow, reminds us of the role of the white man (Europe) in the history and formation of the Garifuna people – the forcible removal and enslavement of the African, the seizure of Garifuna land, which precipitated the Garifuna resistance, and the forcible removal of the people from St. Vincent. Even after the arrival and dispersal in Central America, it was still necessary to deal with the white man.

At another level, white symbolizes the peace that has eluded the Garifuna people for most of their turbulent history – the peace for which they continue to yearn.

Summary
At one level, the colors represent the three principal races, with the black and yellow representing the African and the Carib/Arawak elements that fused to become the Garifuna. At a deeper level, the black symbolizes the hardships and injustices that we managed to survive in the course of our history, the yellow symbolizes hope and the prosperity for which we continue to struggle, and the white symbolizes peace.

Note: The relative position of the colors needs to be clarified or agreed. It is clear that the white strip is always in the middle. The problem is with the black and yellow. I have referred to the black as being on top partly because of the location on the samples I looked at when I was writing this and partly because the colors have always been referred to as “black, white and yellow” and we normally start at the top. However, I have since seen some examples in which the black is at the bottom, including the proposal from my cousin, Ruben Reyes. Roy Cayetano 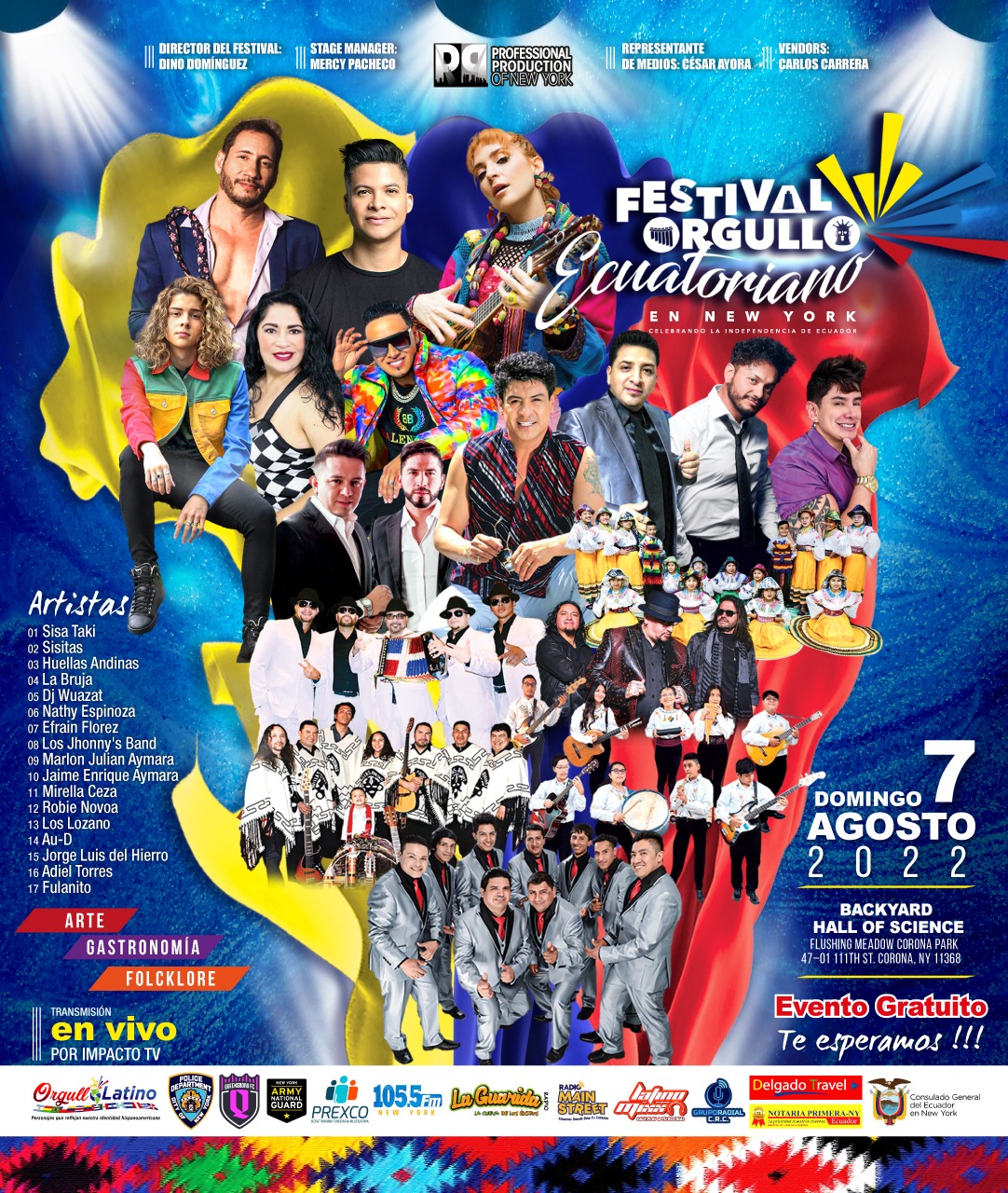