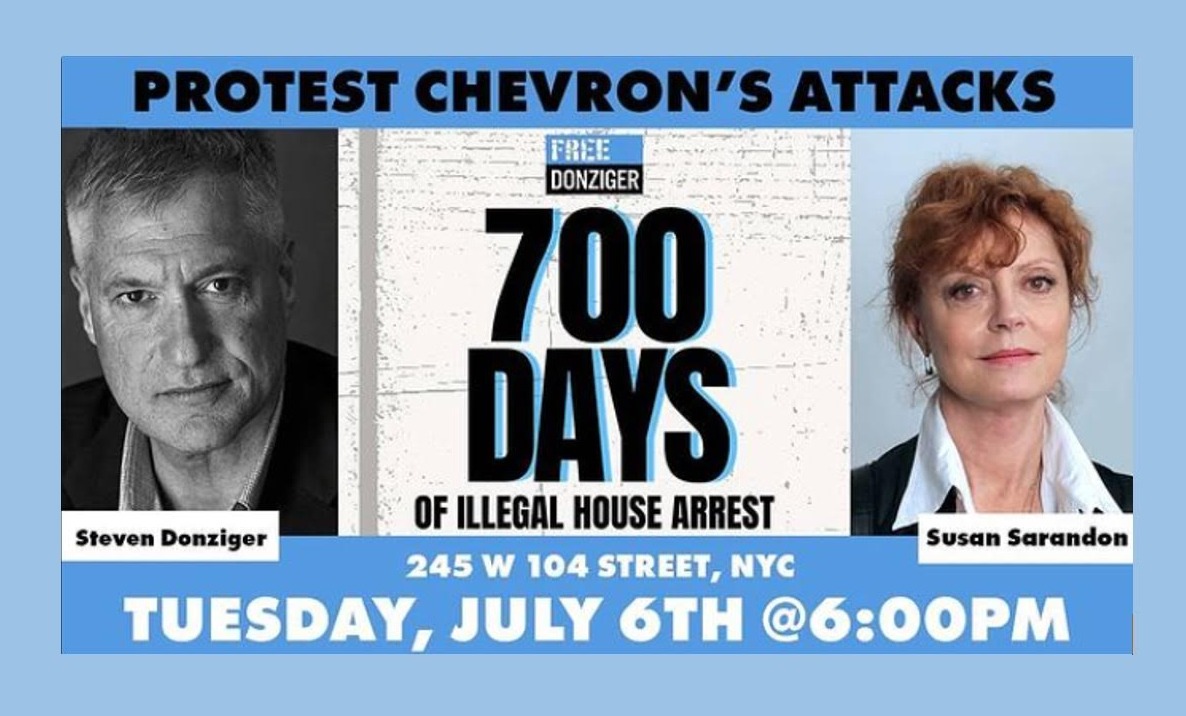 New York City – Supporters of human rights attorney Steven Donziger are rallying the evening of July 6 in Manhattan to mourn the deaths of 2,000 residents of the Amazon rainforest and to demand his release after 700 days of house arrest after he helped Indigenous peoples in Ecuador win a historic $9.5b pollution case over Chevron. Courts in Ecuador in 2013 found the oil giant deliberately dumped 16 billions gallons of cancer- causing oil waste, poisoning ancestral lands in the Amazon and hurtling several Indigenous peoples toward extinction.

Rather than pay the judgement, Chevron launched a “demonize Donziger” campaign in the United States that has involved 60 law firms and 2,000 attorneys in an effort to try to criminalize the attorney. Donziger has now endured almost two years of house arrest in New York City after a pro-Chevron judge and former tobacco industry lawyer charged him with misdemeanor contempt for refusing to turn over his computer and cell phone to the company. The charge carries a maximum 6-month sentence, but the longest sentence ever imposed on a lawyer convicted of the charge is only 90 days of home detention or 7 times less than Donziger already has served. Donziger also is being prosecuted by a private Chevron law firm after the government rejected the case. His supporters consider him a corporate political prisoner.

Donziger is the only person ever charged in the U.S. with criminal contempt for appealing a court order related to discovery in a civil case, according to the legendary civil rights attorneys Martin Garbus and Ron Kuby, who represent him.

Donziger led the legal team that won a historic $9.5 billion judgment against Chevron in 2013 for dumping 16 billions of gallons of oil into the Ecuadorian Amazon, and has since been the victim of a corporate political prosecution by the oil giant.

After the Justice Department declined to charge Donziger with contempt, Judge Lewis Kaplan appointed a private law firm (Seward and Kissel) to prosecute him. Seven months after placing Donziger under house arrest, Kaplan disclosed that Chevron was a client of her law firm. Ignoring the usual practice of random case assignment, Kaplan named Loretta Preska to preside over the casc. Preska is a leader of the Chevron- funded Federalist Society and has taken right-wing positions as a judge, including ruling that evangelical schools can use parts of public school buildings in New York City.

Members of Congress, Nobel Laureates, and organizations including Amnesty International USA, Amazon Watch and 11 other human rights and environmental groups are among those denouncing the unprecedented legal attacks on Donziger, calling for the Department of Justice to intervene in the case.