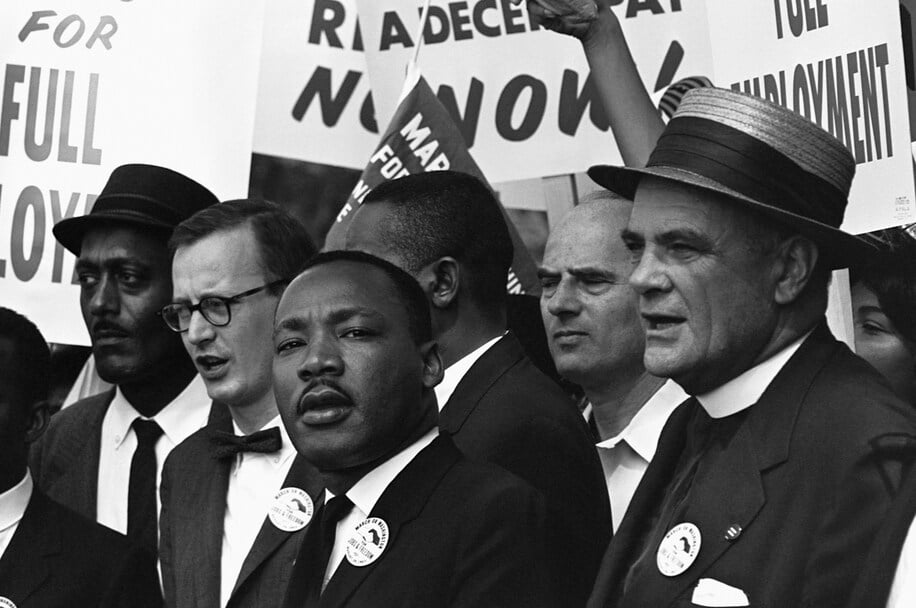 The Rev. Martin Luther King Jr. with compatriots at the March on Washington. on Aug. 28, 1963. (Corbis/Getty Images)

On Friday, legions of Americans will descend on the nation’s capital resolved to take advantage of “the fierce urgency of now,” a phrase coined by Martin Luther King Jr. on the very same day in 1963.

As if more than half a century ago had hardly passed, the two events partly mirror each other in theme: police brutality, voting rights and new legislation to ensure equal treatment. Both the 1963 march and the Friday event — co-sponsored by the Rev. Al Sharpton’s National Action Network, the NAACP, the National Urban League, the Lawyers’ Committee for Civil Rights Under Law and others — share the goal of pressuring lawmakers to act. The 1963 march helped spur the passage of the Civil Rights Act of 1964. The 2020 gathering aims to assure that the John R. Lewis Voting Rights Act of 2020becomes law, as well as a robust police reform bill named after George Floyd, who died in a police killing in May in Minneapolis after an officer knelt on his neck.

The parallels point to the racist policies, behavior and ideas that stubbornly persist, despite the great strides African Americans have made since the 1960s, said Leonard Steinhorn, a professor of communication and affiliate professor of history at American University who lectures about American politics and the 1960s.

The speeches delivered in 1963 before the Lincoln Memorial would still resonate with many Americans today, he noted. In “I Have a Dream,” “You hear King saying that there’s no time … to take the ‘tranquilizing drug of gradualism,’ ” Steinhorn said. King “also talks about the promissory note of our country not being honored,” a reference to the unfulfilled promises of American democracy that still serves as a racial refrain today.

Aug. 28 also marks another anniversary: the day in 1955 when 14-year-old Emmett Till was lynched in Money, Miss., for allegedly flirting with a White woman. It was an act of hate that galvanized the civil rights movement much as the killing of Floyd has done. The murder came to symbolize the racist brutality meted out to Black males, and it also could be referenced during remarks this week.

Here are some passages from the 1963 speeches that may find echoes in Friday’s program.

“Some of you have come from areas where your quest for freedom left you battered by the storms of persecution and staggered by the winds of police brutality.”

John Lewis, national chairman of the Student Non-Violent Coordinating Committee:
“Those who have said, ‘Be patient and wait’ — we must say that we cannot be patient. We do not want our freedom gradually, but we want to be free now. We are tired. We are tired of being beaten by policemen. We are tired of seeing our people locked up in jail over and over again, and then you holler, ‘Be patient.’ How long can we be patient?”

“ ‘One man, one vote’ is the African cry. It is ours, too — it must be ours! We must have legislation that will protect the Mississippi sharecropper who is put off of his farm, because he dared to register to vote.”

Whitney M. Young Jr., executive director of the National Urban League:
“And so this march must go beyond this historic moment. … We must work together even more closely back home where the job must be done to see that Negro Americans are accepted as first-class citizens and that they are enabled to do some more marching. … They must march from the cemeteries where our young and our newborns die three times sooner and our parents die seven years earlier. … They must march from the congested, ill-equipped schools, which breed dropouts and which smother motivation.”

Rabbi Joachim Prinz, president of the American Jewish Congress:
“The most urgent, the most disgraceful, the most shameful and the most tragic problem is silence. A great people, which had created a great civilization had become a nation of silent onlookers. They remained silent in the face of hate, in the face of brutality and in the face of mass murder. America must not become a nation of onlookers. America must not remain silent, not merely Black America, but all of America. It must speak up and act from the president down to the humblest of us.”

PUBLIC HOUSING LEADERS IN NYC, WHO SUPPORTED TRUMP SAY THERE BEEN DECEIVED

This website uses cookies to improve your experience while you navigate through the website. Out of these cookies, the cookies that are categorized as necessary are stored on your browser as they are essential for the working of basic functionalities of the website. We also use third-party cookies that help us analyze and understand how you use this website. These cookies will be stored in your browser only with your consent. You also have the option to opt-out of these cookies. But opting out of some of these cookies may have an effect on your browsing experience.
Necessary Siempre activado
Necessary cookies are absolutely essential for the website to function properly. This category only includes cookies that ensures basic functionalities and security features of the website. These cookies do not store any personal information.
Non-necessary
Any cookies that may not be particularly necessary for the website to function and is used specifically to collect user personal data via analytics, ads, other embedded contents are termed as non-necessary cookies. It is mandatory to procure user consent prior to running these cookies on your website.
GUARDAR Y ACEPTAR