This is what Senator Barack Obama told me the first time I met him. I remember how hotel staff and guests lined up just to see him. It was impossible not to recognize his energy and feel an aura of what was possible. We were all there through the beginning of that momentum, to see someone special.

In February of 2007, I applied to work on the Senator’s presidential campaign, after going through his organizer training program. Three weeks later, I moved to Iowa and served as the Iowa Deputy Field Director to organize voters for the man about to be the first Black president of the United States.

After Senator Obama became President Obama, I joined The Boss in the White House, serving as his associate director of public engagement and the deputy associate director of the Office of Intergovernmental Affairs, where I oversaw outreach to African American and Minority Women Business Enterprises. From there, I joined the 2012 Presidential Campaign, as the national deputy director of Operation Vote. I was taught by an inspirational leader, and I brought what I learned home to The Bronx, where I serve my community in the New York State Assembly. 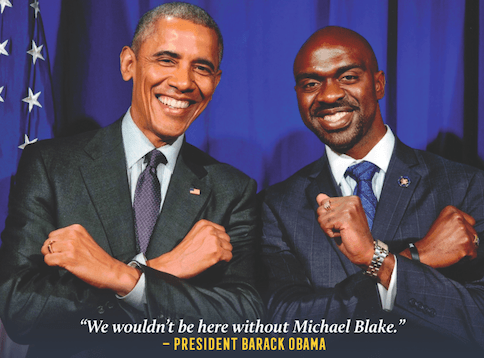 I tell this story, because I think it’s important for all of us in The Bronx to BELIEVE that we have it in us to do great things. I grew up at Creston and Burnside with my parents, Jamaican Immigrants. With their support I graduated from Northwestern University. I found my calling in my community.

We have it in us to BELIEVE in inspiration – and to meet our heroes.

We have it in us to BELIEVE that we ourselves can do Big Things.

We have it in us to BELIEVE that our community is strong and worthy of our support.

We have it in us to BELIEVE that The Bronx is our home and we can make it great.

I BELIEVE in the greatness of The Bronx. I BELIEVE that our people deserve more. I BELIEVE that we need a voice in Congress that reflects the hard-working sisters and brothers who live here. I am Michael Blake, and I am running for Congress in the 15th District. My name is 5th on the Ballot. You are able to begin voting in person tomorrow. You can already vote absentee. Election Day is June 23rd. I ask you for your vote because I BELIEVE that The Bronx is worth it.

If you can, please consider making a donation. We have 11 days to go, and we need to make sure that our message is heard by all of the voters of our community. I am grateful for all you do.

MY CALLING IS TO HELP PEOPLE IN NEED