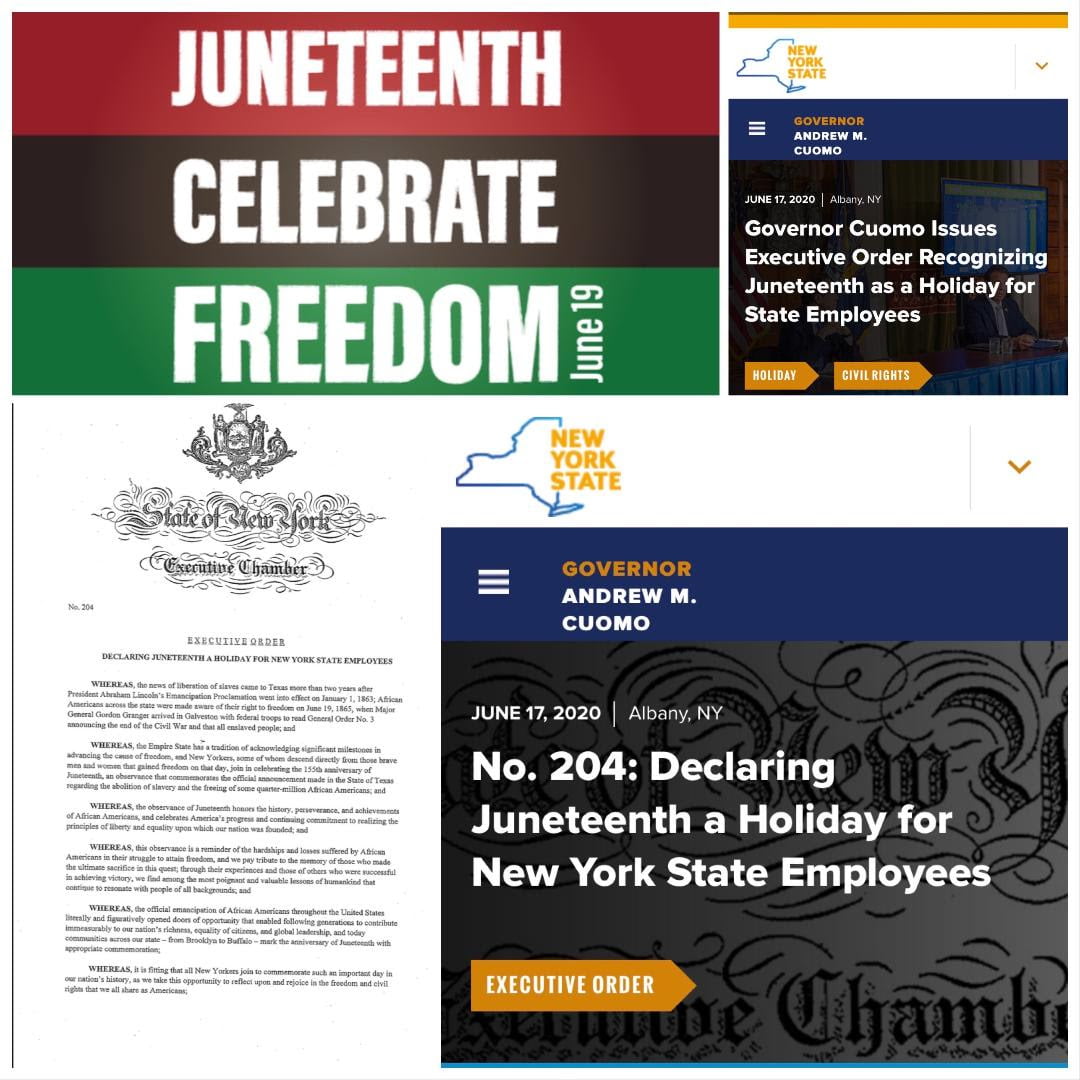 Governor Andrew M. Cuomo today issued an Executive Order recognizing Juneteenth as a holiday for state employees, in recognition of the official emancipation of African Americans throughout the United States. The Governor will also advance legislation to make Juneteenth an official state holiday next year.

«Friday is Juneteenth – a day to commemorate the end of slavery in the United States – and it’s a day that is especially relevant in this moment in history,» Governor Cuomo said. «Although slavery ended over 150 years ago, there has still been rampant, systemic discrimination and injustice in this state and this nation, and we have been working to enact real reforms to address these inequalities. I am going to issue an Executive Order recognizing Juneteenth as a holiday for state employees and I’ll propose legislation next year to make it an official state holiday so New Yorkers can use this day to reflect on all the changes we still need to make to create a more fair, just and equal society.»

Assembly Member Alicia Hyndman said, «..When peace came they read the Emancipation law to the slaves people, they spent that night singin and shoutin. They wasn’t slaves no more.» – Former Slave Pierce Harper, 1937 WPA Slave Narratives of Texas, speaking about hearing he was free two and half years after his given freedom in Texas, NY. Black Emancipation Day, June 19th, 1865 also known as Juneteenth is pivotal in the joy, congregation, and spiritual well being of black people in America. I am pleased that the work I have done to solidify Juneteenth as a holiday in the State of New York is coming to fruition. I look forward to working with my colleagues and the Governor to ensure black history and liberation stays at the forefront of progress.»

Juneteenth commemorates June 19, 1865, when the news of liberation came to Texas more than two years after President Abraham Lincoln’s Emancipation Proclamation went into effect on January 1, 1863. African Americans across the state were made aware of their right to freedom on this day when Major General Gordon Granger arrived in Galveston with federal troops to read General Order No. 3 announcing the end of the Civil War and that all enslaved were now free, as well as to maintain a presence in Texas for the purpose of enforcement of emancipation among slave-owners throughout the state.

Juneteenth is the oldest nationally celebrated commemoration of the ending of slavery in the United States. From its Galveston, Texas origin in 1865, the observance of June 19th as the African American Emancipation Day has spread across the United States and beyond. New York follows Virginia and Philadelphia in its declaration this week as racial tensions are at a high and protests against

racism and police brutality continue across the U.S. Virginia Gov. Ralph Northam announced on Tuesday that Juneteenth will be a paid state holiday this year and Philadelphia Mayor Jim Kenney declared it an official city holiday

Both Cuomo and Northam said they will work with the state legislature to make Juneteenth a permanent holiday.

History
Officially known as Emancipation Day and also called Juneteenth Independence Day and Freedom Day, Juneteenth is a portmanteau word for June and nineteenth and commemorates the June 19th 1865 announcement of the abolition of slavery in Texas and the emancipation of African-American slaves throughout the Confederate South.

While Juneteenth is the oldest known celebration commemorating the ending of slavery in the United States, it wasn’t until 1980 that it was made an official state paid holiday in Texas, through the efforts of Texas state Rep. Al Edwards, D-Houston.

Yes; I Am One of New York’s Most Effective and Proficient Legislators