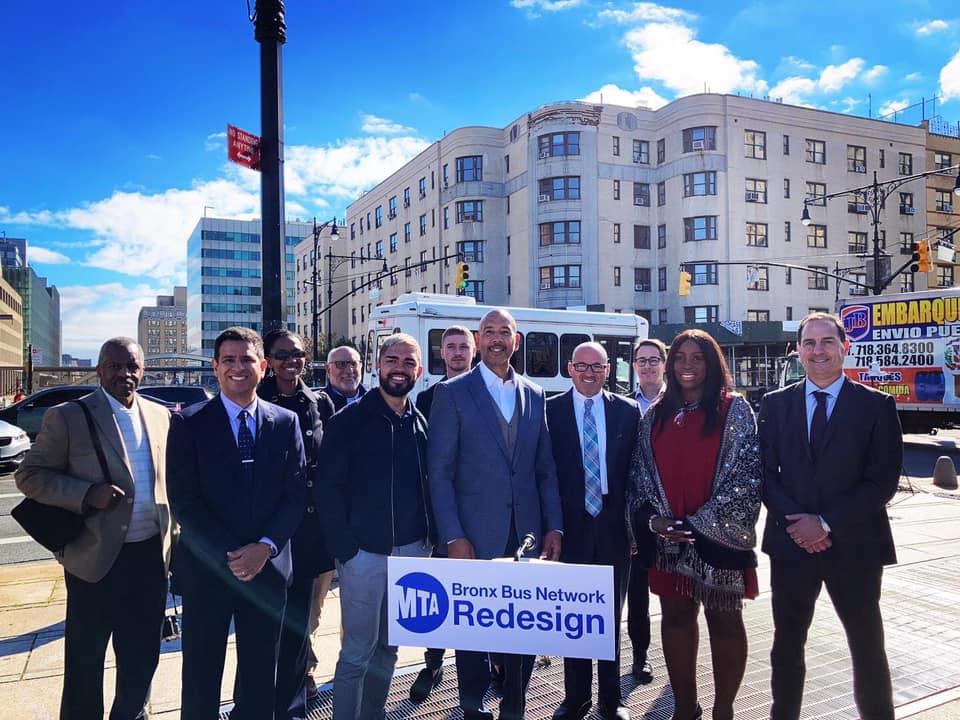 The Metropolitan Transportation Authority (MTA) announced the restart of the Bronx Bus Network Redesign process, with a final virtual public meeting scheduled for Tuesday, Nov. 9 at 6:00 p.m. The virtual public meeting is aimed at further promoting public consciousness around the project and will allow riders one more opportunity to provide feedback on the proposed final plan. The meeting follows additional efforts by the Authority over the last two months to reengage the community on the details of the proposed Final Plan, with implementation currently targeted for the summer of 2022. That plan was originally crafted after years of public input and was set to be taken to the MTA Board for a vote just weeks after what would become the start of the pandemic.
The redesigned bus network establishes a strong foundation on which the Authority can continue to build a successful, high frequency network that serves the hundreds of thousands of customers who rely on the service. The plan demonstrates the MTA’s dynamic approach to providing service and will be able to adapt to the real-time travel patterns and needs of customers. It reallocates resources to the portions of the borough where they will have the greatest impact. The Bronx Network Redesign Final Plan is focused on improving Local, Limited and SBS routes. There are no changes to Bronx express routes at this time. The MTA has been meeting with local elected officials and community boards since last month to review the plan.
“I am pleased that The Bronx Bus Network Redesign is moving forward,” said Bronx Borough President Ruben Diaz Jr. “Although the pandemic has delayed the project, as we recover together, The Bronx Bus Network Redesign will provide necessary upgrades that will help New Yorkers get back to their day-to-day lives efficiently. My office has been involved in the development of this plan from the very beginning to ensure that it meets the changing needs of our borough. The end result of this important process is a huge step forward in modernizing and upgrading the system for the hundreds of thousands of riders who rely on city buses every day. Thank you to the Metropolitan Transportation Authority for their partnership throughout this process, and for the work that you are doing to prepare our borough’s critical bus infrastructure for the future.”
Additional Updates on the Proposed Final Plan:
After publishing the proposed Bronx Network Redesign Final Plan during the winter of 2019, the MTA listened further to feedback from customers, communities throughout the Bronx and Upper Manhattan, as well as community boards, elected officials and advocates. In doing so, the Authority determined that customers and community members value the existing routing of the Bx28 and Bx34 routes over the proposed alignment changes that were outlined in the Draft and proposed Final Plans. With such strong community and customer desire to maintain existing route alignments, these routes’ alignments will now not be changed.
Due to the 18-month pause caused by the COVID-19 pandemic, Bx6 SBS implementation has also been delayed until 2023 to coincide with the retirement of the MetroCard and the full deployment of OMNY across the city. Officials determined that the logistics and expenses associated with installing and then uninstalling fare machines along the future alignment in Soundview for just one year of use is not an effective or efficient use of resources. The associated changes in Bx6 local and Bx5 frequencies will also be postponed until the full deployment of OMNY when the Bx6 SBS realignment is implemented.
Those looking to learn more about the specific details of the plan or changes to particular route profiles are encouraged to review the project’s dedicated website at https://new.mta.info/bronxbusredesign. Those seeking to speak at the meeting can register to do so on the website as well.
Related Topics:
Up Next

Agente Atlántida USA Invites you to a Book Signing Event