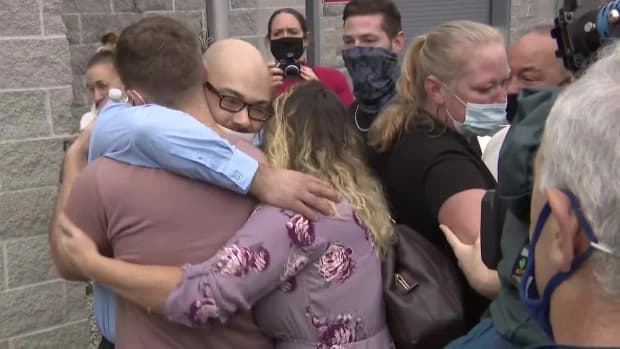 Andrew Krivak embraced after being released while awaiting retrial on Oct. 23, 2020. (credit: CBS2)

CARMEL, N.Y. (CBSNewYork) – A Putnam County man is speaking out after being released on bail for the 1994 murder of a 12-year-old girl.

As CBS2’s Ali Bauman reports, supporters greeted Andrew Krivak as he walked out of the Putnam County Correctional Center on his way home for the first time in 24 years.

“I feel unspeakable amounts of emotion, and before I get too ahead of myself to celebration, I still want it be aware, I’m still wrongfully convicted,” Krivak said.

Krivak is being released on bail for the 1994 rape and murder of 12-year-old Josette Wright after his conviction was vacated last month.

Among those greeting Krivak at his release were his codefendant Anthony DiPippo, who was exonerated in 2016, and Jeffrey Deskovic, who spent 16 years in prison for a similar crime and was exonerated.

“It’s a travesty. He remained in prison four years after Anthony was exonerated on the same set of facts,” Deskovic said.

“The last time he was home, Bill Clinton was president,” DiPippo said. “I love you man.”

The prosecution still has an option to retry Krivak, but the defense is asking for all charges against Krivak to be dismissed, arguing another man, Howard Gombert, is Josette Wright’s true killer.

Gombert is currently in a Connecticut prison on sex assault charges.

“It’s never too late to correct an injustice,” DiPippo said.

It takes significant time and effort to prepare a complex case such as this for trial, and even more so when the crime occurred 26 years ago. The current COVID-19 pandemic has added an extra layer to all of this, and in light of the time and effort it will take to fully and thoroughly prepare this case, we have decided to consent to the defendant being released on bail, which includes a $500,000 bond and him being confined to house arrest with a GPS ankle monitor. We remain confident in our pending application to appeal to the court of appeals and in our case if we have to re-present at trial.

Krivak is on house arrest while out on bail.